After the success of the funding campaign on Kickstarter for the Board Game Victory and Glory, developers from Electric Games are eager to show a new bunch of awesome screenshots for the PC version!

Far from being a mere adaptation from the Board Game, the digital version of Victory and Glory features a vicious and challenging AI, forcing you to use all of your abilities to prevail with diplomatic and military actions alike!

The new screenshots add more details about the scope of the game, featuring a British Blockade along the Channel, an unstable balance of Power in Spain, the defeat of Austria and more!

The game is still in Beta and if you want to help us in giving the final touches you can apply here.

Victory and Glory: Napoleon is a game of grand strategy and fast-play tactical battles where you take the role of Napoleon Bonaparte and attempt to dominate the entire continent of Europe. You will move armies and navies, fight great battles, recruit new troops, and add new regions to your empire. The AI controls Great Britain and the other allied nations and troops that comprise an ever-changing alliance bent on stopping you!

Can you carve out a European empire that will survive the growing threat from perfidious Albion and her allies? Can you change history and do better than L’Empereur?

Get more information about Victory and Glory: Napoleon from its official Product Page!

Awakening, the first DLC (downloadable content) for Call of Duty: Black Ops III, will be available first, exclusively on PS4 via PlayStation Network on February 2nd, 2016, with other next-gen platforms to follow. It includes four new multiplayer maps (Gauntlet, Splash, Rise, Skyjacked) as well as a Zombies experience set in a medieval Austrian castle during World War II.

Der Eisendrache, the first chapter of Call of Duty: Black Ops III’s Zombies DLC adventure will take players on a journey with the Origin characters Richtofen, Nicolai, Takeo and Dempsey. Set in an eerie medieval castle built upon an ancient site of unspeakable horror, massive deposits of Element 115 have recently been discovered, delivering inspired new gameplay and – in Zombies tradition – a variety of exciting plot twists and surprises that fans will have the opportunity to discover for themselves.

The PC beta for Tom Clancy’s The Division is getting underway on Friday, offering the chance to check out the upcoming third-person shooter. Word is participants can begin downloading the client now to prepare, and The Division FAQ has all the details. Here’s the explanation on how to get in: “There are a limited number of guaranteed access codes for the beta. In order to receive one, you must pre-order Tom Clancy’s The Division for Xbox One, PlayStation®4 system, or PC from a participating retailer. Find a participating retailer by visiting thedivisiongame.com/buy. You can also choose to register for the waiting list, but this does not guarantee beta access.” 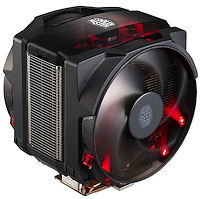 A couple weeks ago, Cooler Master told me it would be sending us a new CPU cooler to review. “Neat,” I thought, musing briefly about another Hyper D92-class heatsink, before filing away the tracking number and forgetting about it for a few days. When UPS showed up with an unexpectedly huge package, I had no idea what it was until I ripped it open and revealed the box for the equally huge MasterAir Maker 8 CPU cooler.

Today, we take our first look at Netgear’s flagship router, the Nighthawk X8 R8500 AC5300 WiFi Router. This router has hit shelves just in time for the holiday gift buying season and is priced at around $343 shipped from most major retailers. This price certainly reflects the standing of the Nighthawk X8 as the leader in the Netgear series of routers but our expectations of what this router brings to the table are high as this is one of the most expensive home networking devices we have looked at.

Following a month without any driver releases (the last one being dated December 21), NVIDIA released its latest GeForce drivers. Version 361.75 WHQL drivers are “Game Ready” for Rise of the Tomb Raider, and Tom Clancy’s The Division (beta). This includes performance optimization, SLI profiles, and GeForce Experience optimal settings. The drivers also come with early (beta) support for GeForce GTX GPUs installed in external graphics solutions over the Thunderbolt 3 (40 Gb/s) interface.

You can download the new GeForce 361.75 WHQL drivers from GeForce Experience and GeForce.com.

As the release date is getting closer it’s time to reveal some introductory videos for Tigers on the Hunt!

In this first Tutorial you will discover the basics of infantry movement and fire, featuring assaults with Officers charging you main attack, flamethrowers units, combat engineers with satchel charges, line of fire and more!

The second Sino-Japanese War was a cruel and bloody conflict often overlooked due to its proximity to the Japanese entry into World War 2 at Pearl Harbour. But the events of this campaign had a great impact on the future of the people and armed forces of both nations.

This conflict, and its protracted nature in the later years, could be seen as one of main causes of the final Japanese defeat. It greatly drained the Empire’s resources, forcing it to deploy thousands of soldiers and war-ships and defend against repeated guerrilla attacks.

Have a look on the infographic here depicting the main stages of the War, and don’t forget to share your thoughts on the forums!

So here we are with another gaming monitor review and this time the focus is on one of today’s most easily recognizable displays: Acer’s Predator X34. This is a truly stunning monitor that has moved the bar forward by including elements like a dramatically curved IPS panel, a high refresh rate and G-SYNC. It hasn’t done so in a particularly affordable way but for gamers who have a top-end system, Acer may have a perfect fit.