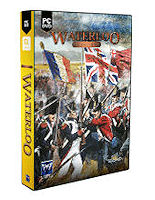 Scourge of War: Waterloo Strategy and Wargaming | permalink
Check out our YouTube Channel