This trailer shows off the M109A6 Paladin self-propelled gun that Obsidian is bringing to Armored Warfare, their multiplayer tank game. The clip includes real-life video along with gameplay footage to show why you might want the Paladin on your side. Here’s word:

“The Paladin is part of the M109 self-propelled gun series originally used by the American military during the Vietnam War and has proven so useful that its modernized form remains in service to this day. In Armored Warfare the Paladin has faster movement and higher rates of fire than most artillery vehicles, but its fire power is less than that of other artillery vehicles in its same tier. Vulnerable to counter-artillery fire if it stays in one place too long, using the Paladin’s extra mobility to change position is often the key to success.”

Latest Expansion for Crusader Kings II Will Pillage Your Hours

It is rather unlike hordes of nomadic invaders to stick to schedule, but the Horse Lords have told us that we can expect a rainfall of arrows on July 14. Horse Lords is the latest expansion for Paradox Development Studios’s much-loved grand strategy RPG Crusader Kings II and it will bring the hellfire of war on the steppes to glorious map-painting life on your desktop.

With a heavy focus on the Mongol and Turkic invaders of the Central Asian plains, Horse Lords adds an expanded map, new ruling systems for the fascinating culture of the nomadic tribes that changed the course of world history from the saddle. There are also some minor tweaks that will affect everyone, including the construction of temporary forts to hold an area in your control and introducing the Silk Road – the wealthy trade highway that ran from the Mediterranean to East Asia.

To celebrate the July 14 announcement, we’ve decided to release a few screenshots that show off some of the coming changes in the Horse Lords expansion. You’ll see some images of the new map, new cultures and new interface.

Take a deep dive into the Call of Duty: Black Ops 3 cooperative campaign with the Cyber Core tutorial and an extended cut from “Ramses Station” as seen exclusively at the Sony Playstation E3 booth. Call of Duty: Black Ops 3 is a dark, gritty future where a new breed of Black Ops soldier emerges and the lines are blurred between our own humanity and the cutting-edge military technology that define the future of combat.

Designed for four-player online co-op or solo play, players will encounter epic cinematic moments and open-area gameplay, allowing players to approach the game with a different strategy each time they play. And now your campaign character is completely customisable: from weapons and loadouts, to abilities and outfits, all with full progression systems and a personalised armoury to show off accomplishments. With these and many more exciting new features, Call of Duty: Black Ops 3 aims to deliver a constantly-evolving campaign experience.

See you on 6th November, the new Black Friday.

Pre-order now and get access to the Multiplayer Beta coming this August, first on PS4. Later on XBox One and PC. Learn more at: http://www.callofduty.com/beta

Get the latest game intel at the official Call of Duty website.

As noted on UbiBlog, Ubisoft is now accepting preorders for Tom Clancy’s Rainbow Six: Siege as Standard, Gold, and Collector’s Editions of the shooter sequel that’s expected in October. The Collector’s Edition includes a backpack and other physical rewards to justify its $149.99 price tag, but the Windows version is listed as PC Digital, even though a steelbox case is one of its perks. The gold edition includes a DLC season pass, and preorder customers are promised access to the closed beta test. Here’s word on what it includes…

Included in the Rainbow Six Siege Collector’s Edition are:

The Art of the Siege Tactical Guide will provide you with all the tips and tricks to give you an edge over your opponents. With advice straight from the development team, the guide highlights each of the Operators and CTUs, weapons, and maps.

Experience the story of Belisarius, one of the last great Roman generals, who was tasked with retaking the former Western Roman Empire by the Emperor Justinian

The Five playable factions are the following: the brand new Roman Expedition, Ostrogoths, Vandals, Franks, and the Visigoths. Each one features its own faction traits and new campaign starting-position. 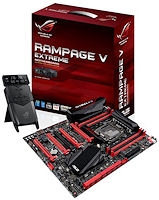 For a number of generations, each motherboard company has had its halo product that pushes boundaries and wallets. For ASUS, the Rampage IV Extreme, based on X79, was a resounding success for sales. We sourced the next chipset iteration, the X99 based Rampage V Extreme, for review to see if ASUS can follow the trend.

NVIDIA’s GeForce Game Ready 353.30 WHQL drivers can be downloaded from GeForce.com or through GeForce Experience.